It's been a very long time (in Internet years anyway) since I've done a blog hop, so when I saw this one from Haiku Farm, I couldn't resist. Feel free to participate by answering the questions below in your blog and then leave a comment with a link to your post in the comment section of this post. Have fun!

*  What's your favorite horse sport?  Do you cross train in other activities?

*  Who else in your family rides?

*  What was your lowest moment as a horse owner/rider?

*  What's the most important small thing you ever learned in a lesson?

*  Do you have any riding rituals or superstitions?

*  What are your short term goals for yourself/your horse?

*  If time and money were no object, what is your dream equestrian vacation?

*  What kind of horse activities were you doing 10 years ago?

*  What kind of horse activities do you think you'll be doing 10 years from now?

*  What is the quirk about your horse that you like most?

Here are my responses to the questions:

I'm a 40-something (seriously 40? I still feel 28, except when I'm running around after my daughter, in which case I feel 73) mother of a 4-year old girl. I work part-time with the US Department of Agriculture on managing grant programs. I love to scrapbook and I am the world's greatest procrastinator when it comes to finishing home improvement projects and cleaning toilets. And then there is the horse. More about him below.

Geronimo f/t Friesian Connection (aka Nimo) is my 1500 lb dog in a horse's body.  He routinely consents to embarking on crazy adventures with me, despite his better judgement.  He's a 14-year-old Friesian gelding who has been with me for 13 of those years and who is absolutely not ideal for things like dressage, endurance riding, and hunter paces. But somehow he does all those things anyway and even seems to enjoy himself:)

What's your favorite horse sport? Do you cross train in other activities?

This is a tough question for me. I don't think I can commit to a favorite because I like doing a variety of things. Conditioning for LDs, Science of Motion dressage work, hunter paces, and meandering around a field are all things I love to do.

Who else in your family rides?

In my immediate family, my daughter rides a bit. I used to ride with both my grandmother and my mom, but my grandma passed away many years ago and my mom has decided that riding in her older age is less appealing than it was when she was younger due to the onset of an awareness of her own mortality.

I think it was the day we finished the Fort Valley 30-mile LD in October of 2014. Technically, we came in 7 minutes overtime, but we finished all 30 miles and I don't need AERC to validate how important doing that first ride was. It was mostly brutal, especially the first 9 miles, because Nimo acted like a fire-breathing dragon on steroids, and the last 15 miles were tiring, but there were a few miles that were actually pretty fun and it was an amazing feeling to think that a horse who couldn't be ridden outside of an arena at one point and a rider suffering from post-partum depression could come together and get through the hardest ride we'd ever done.

What was your lowest moment as a horse owner/rider?

It was when I realized I didn't want to ride anymore and I considered selling Nimo. He was about 7 or 8 years old and the dressage trainer I was working with had convinced me that I was a terrible rider and that we couldn't do even the simplest of tasks. I remember hating every minute in the saddle and I hardly rode outside of lessons because I felt too incompetent to school and too scared to ride my spooky, bolting horse outside the arena.  Thankfully, I came to my senses just in time, fired my trainer, moved Nimo to a new barn, and mentally snapped myself back together.  The biggest step I took was taking ownership of my own riding instead of continuing to believe that I needed a trainer to help me ride.  Riding instructors can be really helpful, but I had lost my barometer and when I decided to get it back, it changed everything.

What's the most important small thing you learned in a lesson?

That Nimo will respond to the smallest movements in my body. It makes sense, really, that horses who can flick a fly off of their skin would be sensitive, but a lifetime of being brainwashed into thinking a horse needs spurs and reins and a whip and big aids was hard to overcome.

Do you have any riding rituals or superstitions?

Not really. I'm mostly too exhausted to even realize that what I'm doing with my horse is actually a dangerous sport.

What are your short term goals for you and your horse?

I'd like to continue the Science of Motion work and learn more about equine biomechanics. I'd also like to try to use that work to get Nimo fit for an endurance Intro ride in the spring.

I'd like to teach Nimo how to pull a cart (totally breed appropriate, for once!), maybe try some team penning (absolutely not breed appropriate), and I want him to live out his days as sound as he can be, even if that means giving up on longer distance rides.

If time and money were no object, what is your dream equestrian vacation?

I'd love to take Nimo to North Dakota and ride the entire Maah Daah Hey trail, which is about a 100 miles, much of it going through the Badlands and other parts of western North Dakota, which is where I grew up.  While I know that I don't want to go back to living in ND, there are still things I really love about the state and riding the Badlands with Nimo (I've done it with other horses) would be awesome. At least until he freaked out at the Petrified Forest, because stumps are there and he's terrified of stumps and probably also prairie dogs, bison, elk, rattlesnakes, and strange rocks in the middle of nowhere. And it would either be 90 degrees or -12 degrees, with tornado-force winds. But I'm telling you that it is an awesome place. Who's with me?

What kind of horse-related activities were you doing 10 years ago?

Nimo was 4 years old, and I was starting him under saddle. It was the year that I gracefully posted over his shoulder and somersaulted on the ground while dislocating my shoulder because there was a gap in the fence I was riding next to and Nimo thought it would be fun to duck into the opening without telling me first. It was also the year that I learned Nimo could do a levade when a herd of polo ponies came galloping at us and that Nimo is not bothered by helicopters flying overhead.

What kind of horse-related activities do you think you'll be doing 10 years from now?

I hope that I'm still trail riding, hunter pacing, driving, and doing schooling exercises on my trusty Nimo. Friesians don't typically live longer than their early 20s, but I really can no longer imagine my life without the big black beauty.

What is the quirk about your horse that you like the most?

I love how Nimo cons petting and treats out of even the most reluctant people who swear they don't even like horses. He has this look that just seems to entice people to love on him. They scratch his butt, rub his head, and dig for carrots in their pockets after mere seconds of being around him. I'm not even sure they realize they are doing it sometimes. It is a sight to behold:)
Posted by Gail at 10:25 PM 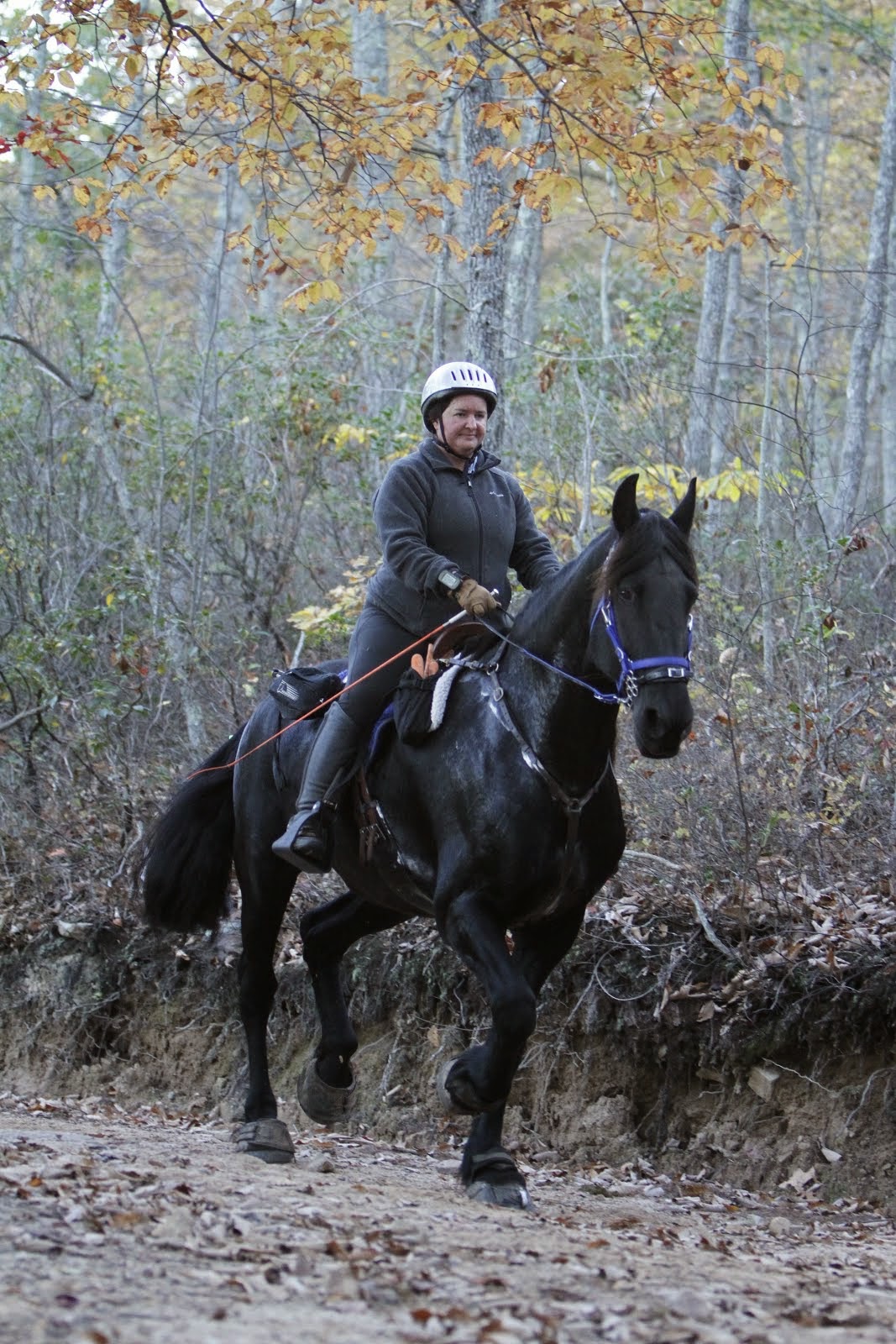